Compspice – Information Technology Portal
Home Amd Motherboard with AMD B550 chipset poses in front of the camera
Facebook
Twitter
Pinterest
WhatsApp
Last year, AMD released the B550A chipset, which, roughly speaking, is the renamed B450. It is designed for use in ready-made computers, and motherboards based on it, when installing a 7-nm Ryzen 3000 CPU, support the operation of one PCI Express x16 slot and M.2 slot in PCI-E 4.0 mode.
In the coming months, AMD will introduce the “real” B550 chipset. A photo of one of the first motherboards based on it was published today by the VideoCardz web resource. Like the older AMD X570, the new product will support the PCI Express 4.0 interface. According to reports, it was developed by Taiwanese company ASMedia Technology and does not need an active cooling system. 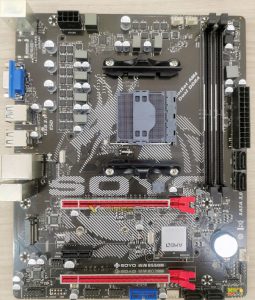 As for the motherboard itself, the microATX-product of the Chinese company SOYO (Maxsun) is captured in the picture. A 6-phase power supply system for the AM4 socket, two DDR4 RAM slots, a pair of PCI-E x16 slots, single PCI-E x1 and M.2, as well as four SATA 6 Gb / s ports are soldered to the PCB.
Given the availability of motherboards, the official presentation of the AMD B550 chipset will not belong in coming.
Advertisements