Following the Ryzen 4000 notebook hybrid processors, AMD will launch similar desktop chips to the market. A prototype of one of these APUs was seen in the online base of the 3DMark 11 Performance test suite. The Gigabyte B550 Aorus Pro AC motherboard based on the AMD B550 chipset not yet presented was the basis of the bench stand. 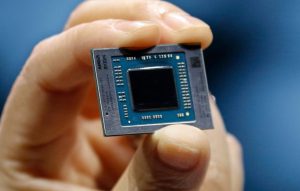 The engineering model of the desktop APU Renoir operated with Zen 2 x86 cores (the exact number was not disclosed) with a clock frequency of 3.5 GHz and a graphic unit on the improved Vega architecture operating at a frequency of 1750 MHz. RAM functioned in DDR4-2133 mode.
If we talk about the results of 3DMark 11 Performance, then the nameless “stone” Ryzen 4000 completed it with 5659 points. In comparison, the mobile Ryzen 7 4700U and Ryzen 7 4800U pass it with 5700 and 6300 “parrots”, respectively. The relatively low result of the desktop modification of the APU can be attributed to the “damp” engineering version and the modest RAM frequencies.

How to prevent domain users from join/disjoin a domain

New AMD Ryzen 7 4700U mobile processors will finally be able...