Compspice – Information Technology Portal
This place is free for your advertisement
Home Intel 10 cores and 5.1 GHz, of which there is little sense. Intel...
Facebook
Twitter
Pinterest
WhatsApp
Advertisements

But Ryzen 9 3900X is not even the top model of the line
The network has details about the performance of the promising flagship processor Intel Core i9-10900K – a model that is notable for the presence of 10 cores and a high frequency of 5.1 GHz. So, as it turned out, at least in 3DMark this model provides almost the same performance as the long-selling 12-core AMD Ryzen 9 3900X. 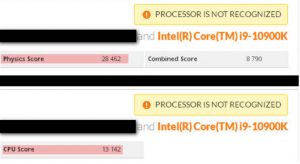 The picture shows the results of the Core i9-10900K test. For comparison, the results of Ryzen 9 3900X in similar disciplines: 27137 points and 12624 points. There is a difference, but not significant. Of course, one can argue that the AMD CPU has more cores, and this is true, but the frequency is lower – 4.6 GHz instead of 5.1 for the Intel solution.
Core i9-10900K is not yet presented on store shelves, but it will most likely prove to be more expensive than its competitor. And certainly, it will consume much more energy. So there’s a little special sense from its 10 cores and very high frequency.
Advertisements

MediaTek will present the second platform for smartphones with built-in 5G...

Intel will not be able to provide everyone with its CPU...