Solid state drives or SSDs have been on the market for quite some time. If earlier they were available only to the elite, since the cost of 1 GB of such a drive left much to be desired, now anyone can buy a high-speed SSD-drive at a relatively ridiculous price. 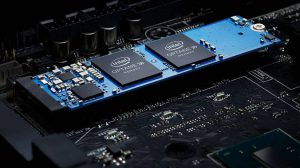 In the recent 2018, Intel began mass production of QLS-memory. Such a memory has four bits per cell. This allows you to create solid-state drives with large capacity, with no record speeds and the lowest record / dub rate. Wearing such an SSD will take much less time than other types of memory.
Given the shortcomings of QLS memory, it is still in high demand. Intel reports that a 10-millionth solid-state drive based on QLS memory came off the assembly line in a Chinese factory in Dalian.
The main and only products based on QLS memory are Intel 660p SSD and Intel Optane H10 hybrid solution.
113 1 minute read
Share
Facebook Twitter LinkedIn Reddit