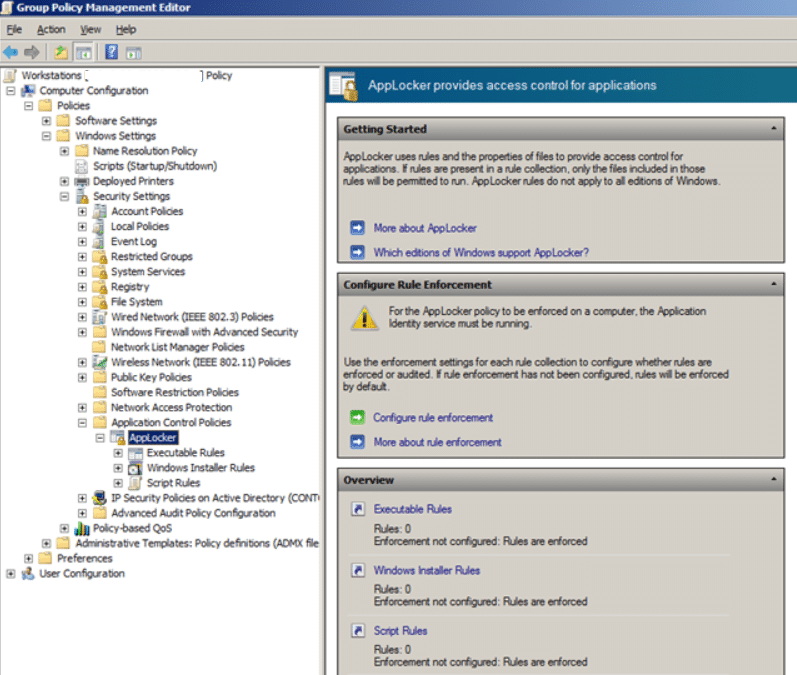 AppLocker is a new technology in Windows 7 that allows a system administrator to block the execution of certain executable files on computers on a network. AppLocker is an extension of the Software Restriction Policy technology (used in Windows XP / Vista), but the latter could block the execution of programs based only on the file name, path, and file hash. AppLocker now has the ability to block executable files based on their digital signature. As a result, you can block programs based on the program name, version, and vendor. This means that if the manufacturer updates the version of the program, the AppLocker rules will continue to block the updated application, thereby reducing the burden on the system administrator. Also, for example, you can create an AppLocker rule based on the software version, thereby allowing you to start only certain previously allowed versions of software. Another advantage of AppLocker is that now it doesn’t matter where the program runs from (even from a memory card), AppLocker will block the launch of the program anyway.

This method of blocking the execution of certain programs using AppLocker can be used to block the execution of any executable file released by Microsoft or third-party developers. In this example, we will try to prohibit the use of the Google Chrome browser using group policy and AppLocker technology (I take this browser for example only, and not because of dislike for it, as many might have thought).

How to use AppLocKer?

Note: If you want to block a specific version of the program, then tick “Use custom values” and in the corresponding field “File version” set the version number, the use of which you want to block with this policy.

Now our AppLocker rules are configured and look like this:

The last thing we need to do is activate AppLocker on target computers.

Application Identity is an application that, before launching any executable file, performs its scanning, identifying its name, hash, and signature. If this service is disabled, AppLocker will not work.

That’s all. After applying this policy, if a user tries to launch a banned application (in our case, this is Google Chrome), the following dialog box will appear:

FOUND.000: What is this folder and can it be deleted?

How to disable USB ports on a Windows 10 PC

AMD refused one model Ryzen Threadripper 3000 because you would not...